A microboard is a small group of people, typically committed family and friends of a person who experiences challenges in life. That group of people forms an incorporated association for the benefit of that person.

The microboard works with the person to help them plan and achieve their goals for a good life. They put the person’s goals, dreams, needs and desires at the centre of their decisions and actions (i.e. a person-centred approach). It also helps the wider community to have a relationship with the person and to benefit from their contribution.

Depending on a person’s particular needs, a Microboard’s role can include assisting with coordinating support services, finding and keeping employment, facilitating friendships & social community.


Isaac is the boss of his own team

The following is a story about Isaac and why he decided to set up a Microboard. 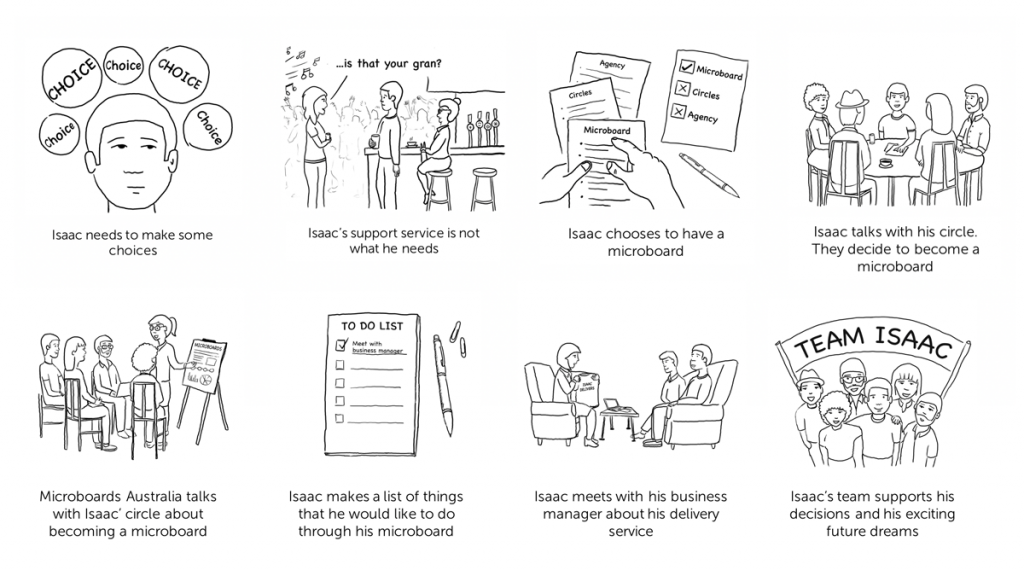 For our family, the greatest benefit of self managing our son Isaac’s NDIS plan has been the ability to recruit and manage the right staff. Being in charge of our own staff has led to great leaps in achieving Isaac’s goals for a good life. In the past, planning and building a good life for him has been made frustratingly difficult by not having the right supports. He has such great potential for work, being a friend, being a housemate, being a community volunteer and more but to make that happen we needed support staff with a specific skill set, values, interests, personality and commitment.

Before the NDIS we were forced to use an agency to provide support workers for Isaac. Their support workers were often students wanting to make a bit of money to survive student life. Just as Isaac started to get to know them and have some predictability in his life, their timetables changed and they would become unavailable. When new staff began working with Isaac we would be lucky to get a single shift handover before they were stripping Isaac off to get into the shower. They would also invariably be completely inappropriate – not the right skill set, too old, no shared interests and so on. Isaac would be subjected to stripping naked in front of people he couldn’t relate to or communicate with, with whom he had nothing in common and didn’t like who disappeared at the end of semester. Sending a 54-year-old woman to support Isaac to hang out at the local pub to listen to a live band was the straw that broke the camel’s back. It was an unacceptable life for us all.

We looked forward to the arrival of the NDIS. It would mean that we could choose the agency we wanted to use. When the NDIS did arrive we looked around and sadly found it was the same old crowd of agencies with the same old problems. Isaac deserved better.

We had been building a circle of support around Isaac since 2007 and with the coming of the NDIS we felt it was time to get serious and turn it into a microboard – an incorporated association. Becoming incorporated meant that Isaac would have an organisation around him that only focussed on him and would operate even without myself and his step dad being around. It also meant that we could set the microboard up as an employer and hire the right staff for Isaac. To do this we decided to self-manage Isaac’s NDIS funding.

We were worried about how much work that would be. We had no experience in being an employer so we were very nervous about the responsibilities that would involve. But the thought of eliminating the frustrations of working with hopelessly mismatched support workers and giving Isaac back his dignity and some predictability in his life helped us to be brave and give it a go. At least this work would be positive work where we were actually empowered to make Isaac’s life better.

To find out what we needed to do to become a responsible employer, members of the microboard researched the Fair Work Australia website, asked some family and friends who owned businesses that employed staff for guidance, did some free training courses through Canberra Business Point and hired an accountant who we could pay with the financial line item in Isaac’s NDIS plan. We learned how to:

It was a lot of work but we didn’t have to do it on our own so it didn’t overwhelm us. It was also positive and exciting work. The largest task was to write a policy manual but we didn’t have to write it from scratch. We took policy manuals that we found through our online research and adapted them. We did it one chunk at a time and with the help of microboard members.

We also learned that while being an employer meant a lot of responsibility and risk, we would be well supported by Fair Work Australia and the Australian Taxation Office. We found them very helpful. They were also quite forgiving if you made mistakes but owned up to them and asked for help on how to do things right.

When it was time to hire the staff our microboard was coached by Microboards Australia in a great process for recruiting good support workers. We learned how to create a job ad that would attract the right kinds of people to the role, how to shortlist, how to interview and onboard new staff. Most importantly we learned about how to include Isaac in the process of hiring his support team. Microboard members assisted with distributing job advert posters, running a group interview and doing individual interviews. We attracted some really great people.

Isaac now has a team of hard working, committed and skilled staff that he adores. They work in truly person centred ways. Everything they do is about Isaac. We have a team of three support workers, a business manager, a decision support and communication mentor, an indigenous cultural mentor, an independent living mentor and a lifestyle coordinator.

The lifestyle coordinator supports our family, the support team and the microboard with administrative tasks like writing staff contracts and performance agreements, coordinating staff meetings and microboard meetings and finding out information we need like finding a swimming coach.

The cultural mentor is teaching Isaac about indigenous culture. He takes Isaac out on bush walks, tells him indigenous stories, explains indigenous language and sings indigenous songs. Isaac loves every minute of it.

The independent living mentor is working with Isaac and his other supports to teach him to learn how to do things for himself such as getting dressed and doing chores around the house.

The business manager’s role is to understand Isaac’s needs at work and to make sure he can be as successful as possible. She works with new business clients of Isaac Delivers to make sure the work and the environment suits Isaac. She then prepares the support workers on how to support Isaac on his new delivery route.

All staff have regular on the job training where we video support staff working with Isaac and review it as a team to look at areas where we can develop better practice and more consistency. We also go away on a retreat once a year along with the Microboard Members where we invite experts to provide training on topics of interest such as communication and managing challenging behaviours.

Because we self-manage, we can still pay our workers well, cover insurance, leave and superannuation costs and still have some money to spare to put into training. We are not paying for the expensive office space, electricity and IT systems of support agencies.

Our accountant does our payroll, tracks our NDIS budget spending, pays invoices from any service providers we use and helps us to figure out how we can adjust our budget if something arises that we hadn’t planned for. Our accountant gives me a list of things I have to claim on the NDIS portal once a fortnight, which only takes me fifteen minutes.

Isaac’s life goals have been so much easier to work on now that we have our own staff. He is working in his own delivery business called Isaac Delivers. The staff have worked together to figure out the best way for Isaac to do as much of the work on his own as possible. They have worked out how he carries the bag, how he hands the bag over, where he stores the bag in the car and how he can use his communication device to interact with his customers. They have also looked at understanding, preventing and managing some challenging behaviours like undoing his seatbelt. Being in charge of our own staff has made all the difference.